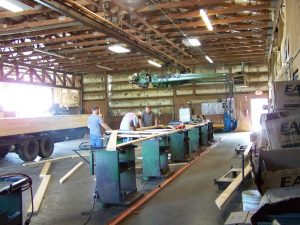 The History of our business…

Schilling Truss Inc. was established in 1986 by late Charles Schilling prior to that he co-owned Schilling & Bauerbach Builders which was established in the early 1970’s. Through the 70’s and 80’s they were one of the largest construction companies in southeastern Ohio.  Charles was no stranger to the construction industry; in 1986 he started Schilling Truss Inc. on his farm outside Beverly, Ohio. In 2003 his son Jeff became a co-owner along beside his father. In 2007 Jeff bought the rest of the company from his father and became the owner of Schilling Truss.

Schilling Truss only used top-notch dependable products with the highest of quality and comparative prices.  Today, Schilling Truss is your one stop shop for all of your building materials where we treat all of our customers as family.

Your Home and Business is our Family Business

Reliability, Reputation, Experience and Commitment are our building blocks of trust and trusses. For close to four decades, Schilling Truss has been owned and operated by the Schilling Family. Our staff’s combined experience easily exceeds 100 years. Call 740-984-2396 or Email Us Now.

We take our business seriously and treat our customers like family!